Hans and Thea Neuschwendter about their life as sacristans of Salvenkirchlein

At the Hohen Salve, 1829 m above sea level there is a tiny church, St. John's chapel, also known as Salvenkirchlein . The chapel has been a destination for pilgrims for hundreds of years. Today, the Salvenkirchlein is also my destination, because I am going to meet a couple who have made a very special job their calling: Thea and Hans Neuschwendter from Hopfgarten who look after the Salvenkirchlein on the summit.

Right at the beginning the two tell me that people have been coming to the Hohe Salve summit for countless years. The fact that a special power emanates from the summit of the Hohe Salve was already known to pagan indigenous inhabitants of the valleys around the Kitzbühel Alps.
“I definitely feel the Hohe Salve as a place of power,” Thea says to me and somehow I also feel it: a special energy emanates from this mountain. Together we look down from the summit into the valley. It's a bright day, almost cloudless and the view is amazing. It is not for nothing that the Hohe Salve is known as the most beautiful panoramic mountain in Tyrol. Behind us stands the Salvenkirchlein. "It is the highest pilgrimage church in Austria," Hans tells me proudly. He is a sacristan on the Hohe Salve. He and his wife Thea took on this task after his retirement. They like to do it with full heart and soul, you can see that in them. 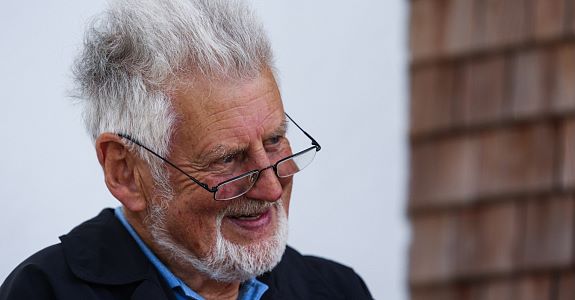 Hans Neuschwendter“It's just different on the mountain. The people are different. More open, friendlier, more grateful. That's one reason we're doing this. We always come up here together and do everything together. "

Guardians and prayer brothers have been around on the Hohe Salve for a long time. These were mentioned in writing for the first time in 1617. Performing a sacristan’s duties, the selling of drinks and warning the valley residents of an approaching thunderstorm - those were the tasks of the guardians back then. Hans and Thea are also keepers on the Hohe Salve. They look after the little church, make sure that everything is clean, sell candles and take care of the flowers. During masses and devotions, they ensure that everything runs smoothly. The two also hold devotions themselves and are happy about a little church that is almost always full.
“St. John's Day or Anna's Day are very special days. On these days several hundreds of people make a pilgrimage up to the Hohe Salve and their destination is the little church, ” Thea describes to me.

Weddings are also repeatedly celebrated in the chapel. Invisibly, Hans and Thea accompany these beautiful moments from the background and ensure that it becomes an unforgettable ceremony for everyone involved. Apart from these happy celebrations, the two sacristans are also touched by the quiet moments in which people carry their worries to the summit and silently light a candle. 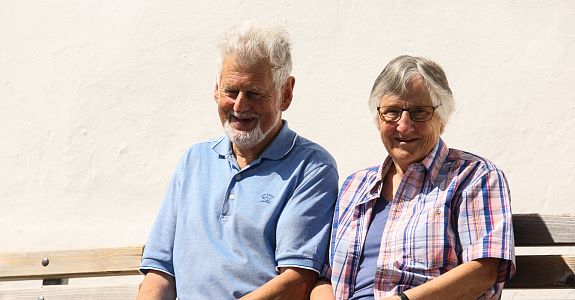 Thea Neuschwendter“It's not just the loud, happy moments that make it up. I am more impressed by the silent prayers. "

Again and again, people wander up to the Salvenkirchlein and bring forward their worries and pain to God. That was the case before, tell me the two sacristans. People made pilgrimages to the Hohe Salve with clay or wooden heads which were then carried around the altar three times in the hope that this would provide relief, especially for headaches, depression and intervertebral disc problems.

Today, however, many go up to the church to find peace, they long to escape from everyday life. "With all the hectic pace of today, walking steadily calms you down, you come to yourself, your head becomes empty but your heart full," says Thea.

Empty in the head but full in the heart. I particularly like this sentence, because I notice myself how calm and at the same time fulfilling walking, especially hiking, is. And how nice it is when, after a hike, you can sit down in a church like the Salvenkirchlein and recharge your batteries in the quiet.

In the past, the guardians on the Hohe Salve still had another important task. They had to warn the residents of the surrounding villages of storms since high up on the mountain, and especially on the very free-standing summit of the Hohe Salve, they could see the thunderstorms coming already from afar. Then, the sacristan had to wave a white sheet and ring the weather bell, the so-called Salvenhund. The farmers down in the valley then would also sound the alarm.

Even today the church bells ring in the valley when the sky turns deep black and the locals are sure that this is the reason why the region is so often spared from bad storms.

Hans and Thea have been working on the Hohe Salve for almost 20 years. The two of them are not thinking about retirement for the time being, because before they hand over their honorable task to their successors, they have a lot more to do. "A few more construction sites and then I want to hand it over in good condition," says Hans. In the meantime, however, the two sacristans still enjoy their remaining time up here and continue to guard the little church, as the prayer brothers did over 400 years ago.

The secret of blueberries